My running has been less than stellar recently. Considering I ran a 10k this past weekend, the timing is bad. I haven’t had a run that felt good in quite some time. Even three miles is somewhat of a struggle, so running over six was much more difficult than I anticipated.

I was thrilled to be in Chicago with my husband visiting my niece. Being from the ‘region’ in Northwest Indiana, which is only about thirty minutes from the Windy City, Chicago has always held a special place in my heart. I love the skyline, Lake Michigan, the museums, the shopping, and the architecture. It’s truly a beautiful city. I registered my niece and myself for this race a few months ago; we decided on the 10k rather than the half marathon, which turned out to be the perfect decision. Though I have run along the lake while visiting the city, I was excited to run a race there.

Gary and I arrived in Chicago Friday afternoon, dropped our things at Erin’s, and hopped on a bus to go downtown and get our race packets. That might sound simple, but we were slightly anxious that we would end up in the wrong neighborhood nowhere near race headquarters. As we exited the bus – on the right street – we began to take in life in the big city. Gary and I are at opposite ends of the spectrum when it comes to country life versus city life. As he was commenting, “I could never live in this city,” I was saying, “I could so live in the big city!” Realistically, it would probably get old, so for now I’ll enjoy visiting Erin. That evening we met up with Erin for a pasta dinner, and went for a walk down to the lake. Since we had to get up early for the race, we were in early. One of us practically passed out while talking. I won’t mention a name, but it wasn’t one of the old ones! 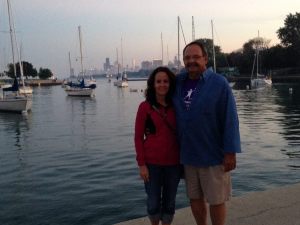 Saturday morning the three of us caught the bus, and took off for the race. While I am usually really grouchy the morning of a race (my nerves get the best of me, and I don’t like to talk or be talked to), I felt unusually calm. Even when we realized we had missed our stop and had to walk about 1/2 mile back to the start, I didn’t get stressed out. In my highly-anxious mind, that’s impressive. As we approached the starting line, there was a sea of pink. Although I typically wear pink, I went against the trend and wore yellow. This was my first all-female race, and I didn’t want to over-do the girliness. Tutus were not an option for Erin and me. No way. 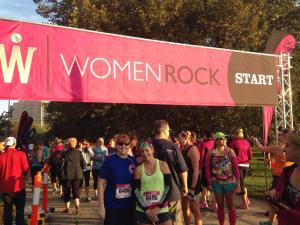 My goal for this race was to run it in under an hour. If we kept a 9:30 pace, we would do it. Our first mile, we ran a 9:08 pace – perfect. The second mile we ran a 9:13 pace, which was still good, and left us room to slow down during the second half. The third mile I began to struggle. STUPID. This was a 10k; I have run five half marathons; this should be easy. One huge mistake I made was not drinking any water on Friday. STUPID. In my mind, I was only running a little over six miles, so I didn’t need to worry about hydrating or nutrition. STUPID. I always need to worry about hydration and nutrition. Third mile: 9:40 pace. Crap. I told Erin to go ahead because she was running well. She wasn’t going to, but I told her I didn’t want to feel guilty for holding her back, so she went on. During mile four, I kept telling myself to enjoy the beautiful day; I was running in CHICAGO! I had the gorgeous blue lake with sailboats scattered about on my right, and the picturesque skyline on my left. There were runners everywhere. This race was different than any I have run because the course wasn’t closed. There we literally hundreds of other runners who were not participating in the race along the course.

Mile four….9:27…back on track. Lord, I was tired and my legs felt like I was trudging through wet sand. Mile five…I could do this. It was only a 10k. What was my problem? Why did I feel like I was not going to finish? And I was definitely not going to register for the Indianapolis Monumental Half that Gary and I had planned to do. No freakin’ way. Mile six. The last full mile. 10:05. For Pete’s sake, I just kept getting slower and slower. But I was not going to stop. The finish line was within my reach, and I was not going to walk. As I approached where I thought the finish line was, I picked it up a bit because I thought I was going to meet my goal. When I realized where the finish line actually was, I knew I wasn’t going to make it. My official time was 1:00:22. I missed my goal by twenty-two seconds. If you don’t run, that might not seem like a big deal; if you run, you understand just how frustrating that was. But it was over, and I hadn’t walked. (Erin and decided to walk the three miles back to her apartment. This picture shows her cooling off in a random fountain. Yes, I dared her. I didn’t even have to triple dog dare.)

What I don’t understand is why my running has gotten worse since I quit running every day. Shouldn’t my legs be rested and ready to race? The last 5K I ran, my pace was 8:47. My pace at an August two-miler was 8:04. Now I am trying to decide if I want to keep trying to increase my distance, or if I want to stick with shorter distances and work on getting faster. On the way home from Chicago, I read an article about the benefits of 5Ks. Perhaps that was my sign.

When the results were finally posted, I saw that overall I placed 133 out of 977, and in my age group (40-49) I placed 33rd out of 301, which isn’t too bad. Erin placed ninth in her age group, and 75th overall, which is outstanding! She doesn’t usually run races, which makes it more impressive. So in the end, it was worth the effort. For our efforts, we got really nice jackets, necklaces, and medals. We also got to share some special time together. And we celebrated with Giordanno’s pizza that evening; I’d run another six miles for that.

So, what’s next? Right now your guess is as good as mine. We are going to go watch some friends finish at the Evansville Half Marathon this weekend. I will likely attempt another long run Sunday. And if it sucks, I am never running again. At least not until the next week…or day. I hate running. But I love it, too.