As my friends and family know, my family’s summer was consumed by “Mary Poppins”. In April, Gary, Addie, and I all decided to participate in the Schweizer Fest production, knowing that there’d be little time for anything else; we weren’t disappointed. For those of you who don’t really know what it means to commit to the summer musical, I thought I’d fill you in.

Despite Gary’s reluctance to try out, he landed the role of George Banks, which was a big one. When the musical was first announced, the girls and I just knew he’d make the perfect Mr. Banks, and boy were we right! From the moment Gary received his script, he studied. Any spare moment was spent memorizing the multitude of lines and the songs. He put his heart and soul into that role, and as many can attest, it showed on stage this past weekend. He was fabulous!

Addie and I were in all the same scenes in a variety of roles. We had music to memorize and dances (including tap) to learn. The choreography for this show was pretty tough for amateurs, so we spent lots of time at home practicing, and meeting friends so we could get some extra practice time in. Anytime I was alone in my car, I had my music on and practiced the songs.

In June we had rehearsals four nights a week for about three hours a night. In July we stepped it up to five nights a week, and a minimum of three hours (usually more like four). The final fifteen-day stretch, we had one day off. While many of our cast members worked during the day, I was fortunate to be off. I spent much of that time helping with tickets, writing the programs, organizing the ushers, and working on some other behind-the-scenes tasks.

I tell you this because I want you to know the time that is spent putting on a production of this magnitude. My time doesn’t even compare to the lead actors, set construction crew, artistic director, technical director, music director, or the head honcho, Tammy. But do you know what’s really neat about it? We all loved (almost) every minute of it. I never dreaded going to practice because I grew to love my fellow cast members and we enjoyed our time together. Even after a difficult rehearsal, I was ready to go back and try it again the next night. We laughed together, cried together, and helped one another. We teased, encouraged, and supported. We became family.

One moment that stands out was a ‘Coby’ moment (Coby played Michael Banks). The cast was standing in a circle before a performance preparing for our prayer, and Coby had something to say. This 13 year old boy said that he wanted us all to know that he loved us, and that this had been the best summer of his life. There was hardly a dry eye in the room. That’s what it’s all about. Together our cast had several of those beautiful moments, but they are far too special to share.

“Mary Poppins” was an outstanding show! Over 2100 tickets were sold, and in a town of 7292, that’s really impressive – 29% of our population! I realize some family members went more than once, and we had some people from out of town, but it still speaks well for our community. This was the first time we had social media with which to market, and I believe it made a huge difference. After opening night, Facebook blew up with great reviews, which resulted in more sales. We so appreciate the community support. Without it, there might not be a next time, and from what I’ve read, the community would like to see this continue.

And then came the ‘after’. Our final performance was Sunday. I awoke feeling a little down. I knew it would be my last time on stage with this beautiful group of people. It was such a privilege to just stand in a room and sing with such talented people. I love to sing, but don’t have the best voice. Somehow when I sang with the cast, I felt better about my own singing (maybe they were drowning me out!). Even standing in the wings watching my friends perform was an honor. After seeing the same scenes over and over, I still laughed because each time it was so much better. The performers were top-notch. Knowing Sunday we would take our final bows had me on the verge of tears most of the day. At times, those tears overflowed.

I was definitely not the only one. As we prepared for our final curtain call, many were near tears. I’m sure our audience had no idea how difficult it was for many of us to hold it together well enough to sing. As we began to disassemble the set, that had been so carefully constructed, and then beautifully painted by Sam, there was a knot in my stomach. All that work, and within two hours, it was gone. Costumes were boxed up and prepared for shipping; our backstage hangout was returned to a classroom; and the sets became a pile of colorful lumber.

And then came the cast party. One of our cast members, Ashley, compiled a wonderful slide show that showcased our summer’s work. We talked about the memories that were made, the friendships that developed, and about working together again someday. Saying good-bye was awful. As hard as I tried not to cry (again), I couldn’t help myself. As we hugged and promised to stay in touch, many tears flowed. I’ve never seen a group of people – young and not-so-young – have so much trouble saying good-bye. I’ve never witnessed such love among a group that size.

If you ever wondered what it’s like to be part of community theater, know that it is like nothing else. We come together as amateurs – some with a lot of experience and some with absolutely no experience – and we learn and practice and cuss and cry and laugh and complain…and out comes an amazing production. We do it with dedication, hope, and love. Along the way we all grow as individuals. It’s so much more than ‘being in a play’; It’s being part of a theater family. And I truly miss my family. 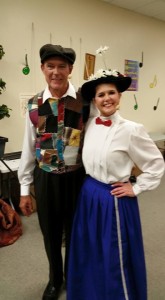 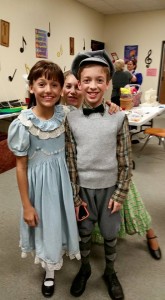