On November 5 I will run my tenth half marathon, the Indianapolis Monumental Half Marathon. It’s been two years since I ran an entire 13.1 miles; the last three I worked some walking in for various reasons. I need to know I can still run the whole route – that my knee can endure 13.1 miles of pounding.

However, accomplishing that goal is not the most important aspect of the race. This race is special because I will be running it with my daughter Bethany. She began running in January of this year, and has since run a couple 5Ks and a 5-miler. She decided this summer that she was ready to take on the challenge of running her first half marathon, and I agreed to train and run with her. When Gary and I began running almost eight years ago, our hope was that we would be a positive example for our kids and grandkids. We wanted to show them that it is never too late to live a healthier lifestyle; it is never too late to set and achieve goals. Since that time, all of the girls have worked fitness into their lives. Gary’s daughter Tamara and her girls have participated in Girls on the Run; Morgan has run a few races and was recently certified to teach yoga; and the youngest, Addie, has now begun running and hopes to work up to a half marathon. Gary’s son Bryce has always been active. He and his wife run, ski, and climb. I don’t know how much we have influenced our children’s choices, but I hope we’ve had at least a little impact. 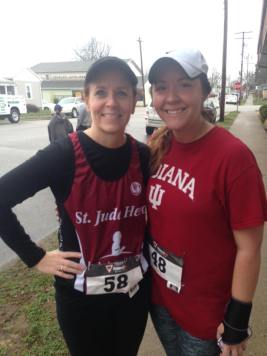 Training for this race has been interesting. I haven’t worked as hard as I should. It stayed hot so long that my runs suffered. Our long runs have been slower than I would like, but we’ve kept running. This past Saturday we ran 11 miles, our longest training run. It went better than our previous long runs, and I feel that Bethany is ready for this race and will run well. I feel that I had better quit eating junk for the next two weeks and increase my water intake or I’m going to struggle. No matter what, I wouldn’t trade these past weeks of sharing this experience with my daughter. I cannot wait for her to experience crossing that finish line because I know it can be life-changing. I know she will gain a confidence she’s never experienced. I know she will feel a sense of pride that is unlike any other. I know she’ll want to sign up for another!

I have had the unique pleasure of running two of my nieces’ first half marathons with them, and felt so blessed that they wanted to share that time with me. After running a couple 5Ks and a 10K together, Erin and I ran the Monumental two years ago – it was 15 degrees that day. Emily and I ran the Hoosier Half Marathon in Bloomington. Despite being held April 9, it was 20 degrees at the start, and it did not warm up (I won’t even get into the hills). Now I have the honor of running 13.1 with Bethany, which I hope will take place on a perfect 55 degree day. There is something special about running a longer race with someone. If you run, you know that some of the best, most honest conversations take place when we are drenched in sweat, our muscles are aching, and yet we carry on…together.

I’ve written before that sometimes a race is about so much more than a PR or personal goals. My best runs have been when I’ve run for a greater cause, whether it was to help someone complete her first half, or to raise money and awareness for St. Jude. The medals earned represent time spent training and sharing in a common goal. The medals represent not giving up, even when it hurts. They represent achieving something that a few years ago seemed impossible.

Bethany, I am so proud of you! You’ve accomplished so much this year, and it is truly my honor to run with you. I pray for clear skies, perfect temps, strong legs, and settled bellies. Heck, maybe someday you, Morgan, Addie, and I can run one together. That would really be a miracle! Let’s eat healthy foods the next two weeks, okay? Good Luck, Bethany! Thank you for allowing me to be your running partner. Thank you for loving yourself enough to take on such a monumental challenge. Now go #BeMonumental!